American Psycho, Mary Harron’s adaptation of Bret Easton Ellis’ literary smash of 1991, is hilariously violent and shockingly satirical.  Early in the film, as the movie’s protagonist Patrick Bateman (Christian Bale) rides in the back of a luxury town car with his fiancee Evelyn (Reese Witherspoon), she asks him why he stays in a job he professes to hate.  Bateman’s response, delivered with furious intensity by Christian Bale, perfectly encapsulates one of the film’s central theses:  “Because I want to fit in.”  This sentence’s last two words are delivered with withering severity, and this seems to show that beyond its indictment of toxic masculinity, this film shows us a creature shaped from the ground up in a world of excess, depravity, and most consequently, fear.

Bale’s performance, which for my money is the best of his exceptional career (so far), shows us a character who is at once the master of all he surveys and a frightened child locked in a tall tower.  The interplay between these aspects of Bateman’s character provides the grist for much of the drama in the film, as well as most of the comedy, which is endlessly hilarious.  In what has become the film’s most famous scene, the coworkers at Bateman’s place of work are showing their business cards to one another, and when Bateman asks to see Paul Allen’s card, he is unprepared for the effect it has on him.  “Look at that subtle off-white coloring, the tasteful thickness of it,” as Bale performs this inner monologue, his voice has an almost sexually dusky nature.  When he finishes analyzing this superior business card, Bateman is shaken by the sight of it, and recoils into himself so much so that one of his coworkers inquires whether he is okay.

In this scene, Harron shows us the true weakness at the heart of corporate culture, and displays the power of envious spite.  This structural bitterness first shows itself violently when Bateman (Bale) attacks Paul Allen (Jared Leto) with an axe, concluding his hilariously vain review of the album Sports by Huey Lewis and the News.  After this first swing of the axe, during which Bateman was victim of his own psychopathy, he continues to chop Paul as he expresses the true motivation behind his violence.  “Try getting a reservation at Dorsia now, you fucking stupid bastard!”  Lines like this, hilarious and pointed, exemplify what I feel is at the center of the film; that unjustly privileged men, elevated more by their pre-determined place in society than by effort or talent, are liable to become deranged when faced with the reality of their own inadequacy.

American Psycho, both the novel and the film, stand as bristling critique of American society.  As it comes to sex, Ellis’ novel exposes the the animalistic savagery inherit in male urges, and Harron’s film shows the way easy satisfaction of all desire can result in escalating aberrant behavior.  Beyond any broader social points the film makes, it cannot be denied that this movie, and Christian Bale’s star-affirming performance in it, are as entertaining and thought provoking as any film of their era. 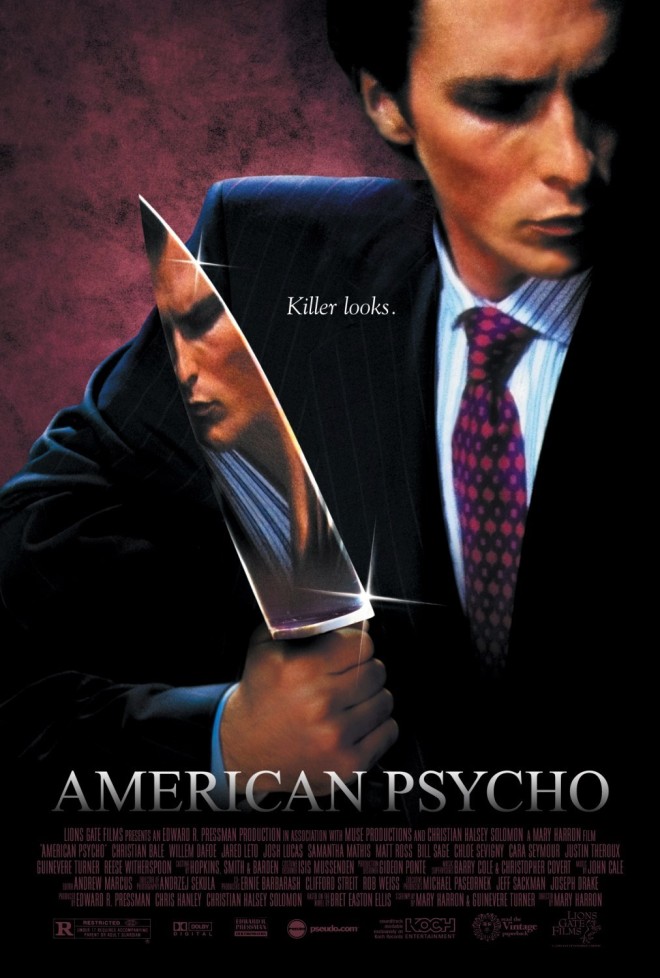 A Most Violent Year, the striking feature from up-and-coming writer-director J.C. Chandor (Margin Call, All is Lost), is an astounding achievement.  From the performances (Oscar Isaac, Jessica Chastain, Albert Brooks, David Oyewolo), the intensely layered plotting, and the fantastically subtle screenplay, it is in every way superior.  Set in New York, 1981, the time, date and location, in captions, are the first things seen on screen.  Beyond this, the film is conspicuously absent of any dating, as no pop culture or even news from the time receives any mention in this insular, personal story.

It would only be possible to tell such a personal story with an extremely gifted actor in the lead, which this film has in Oscar Isaac (Drive, Inside Llewyn Davis, Ex Machina).  In an early scene Abel Morales (Oscar Isaac), giving his newest sales reps a pep talk before they head out for the first calls, says “You will never do anything as hard as looking someone straight in the eye, and telling the truth.”  While Abel is allowed by his position to believe that this is true, his wife and head accountant Anna (Jessica Chastain), daughter of a reputed New York mobster, knows that things are more complicated than that.  With his wife and his attorney (Albert Brooks) telling him from one side that he must deal with the gangsters ripping him off in whatever way he can, Assistant District Attorney Lawrence (David Oyewolo) watching him closely for any malfeasance, and a slate of hijackings crippling his business, Abel must find a way to survive.

But for Abel, it is not enough merely to survive, he must thrive and conquer.  This brings us to the core of what A Most Violent year truly is; an immigrant story.  In one pivotal scene Anna (Chastain) laughs at her husband for believing that they’ve achieved their opulent lifestyle purely through the sweat of his own brow, when she knows that the truth is far murkier than that.  He follows what he refers to as “standard industry practice,” glossing over the fact that these practices include some things (like under-reporting load weights and hiring undocumented workers) that are not technically legal.  The film does not dig deep into what specific illegalities Standard Oil (Abel’s Trucking company) perpetrated, preferring instead to load its script with beautifully written and intensely emotional speeches.

I’m so personally enamored with the central performances in A Most Violent Year that they almost overshadow the screenplay, but the screenplay is so precise and well-observed that it shines through as the most exemplary component of the film.  When Abel has a meeting at the back of a large seemingly Italian restaurant with the heads of other, presumably larger oil companies in the area, he sits them down and says simply, “stop.”  The simple desperation of this conversation is matched by the next scene in which, during a conversation with his college-student nephew, a cadre of girls walk by and Abel simply says “Jesus, I don’t know how you get any work done around here.”  This simple spot of humor caused me to laugh out loud, though it is not all that funny, because with this his third film, J.C. Chandor has introduced himself as a master of understated tension, and created what may come to be the greatest film of the decade.

Movie Review: A Most Violent Year