Alexander Paine’s Election (1999), a portrait of small-town high school politics is hilarious, realistic, and in the end very meaningful.  In the center of the film is a remarkable, rigidly intense performance by Reese Witherspoon.  She plays Tracey Flick, a High School student who’s commitment and ferocity distinguish her from her classmates, and she knows it.  Her character’s mask of cheeriness, along with her inexhaustible supply of energy, bring her into conflict with her high school social studies teacher, Jim McCalister (Matthew Broderick).

Broderick plays the ostensible protagonist of this story, and his self-serving inner monologue (which all four main characters also have) makes a comical juxtaposition with his callous actions.  He knows that Tracey Flick (Witherspoon), his most committed student, would surely win the titular election, and he feels he cannot let that happen.  In order to defeat Tracey in the election, he selects the student who is most clearly Tracey’s opposite, Paul Metzler (Chris Klein), to run against her.

Paul Metzlerl is absolutely brainless, but his heart is the size of a mountain.  At night, as he lies in bed with his hands folded over his chest, he prays “Please help her (his sister) to be a happier person ‘cause she’s so smart and sensitive and I love her so much.”  The sweetness in Chris Klein’s performance is hilarious and heartwarming, creating a nice counterpoint to Jessica Campbell’s perfectly centered performance as the film’s only truly sympathetic character, Paul’s younger sister Tammy Metzler.  Tammy Metzler, who’s inner monologue we could most easily imagine coming from a real teenage girl, acts as the audience’s true surrogate.

All these characters are woven into a complex tableau of small-town debauchery and the worst of intentions into a simple, short, magnificent film.  As negative as this film’s portrayal of small-town “values” and extremely selfish people, disguises in itself what I believe is a soft heart.  In the end, I believe Election is a sort of ethical treatise, and one that sees all its characters get their just desserts.  Election is hilarious, layered, and brilliant.  I recommend you see it. 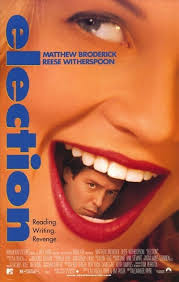